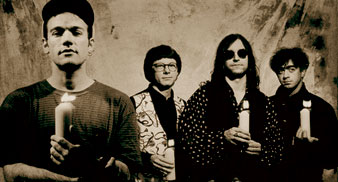 As we announced a while back, REM are to celebrate its 25th anniversary by reissuing a deluxe version of their debut album Murmur.

The two disc set comes with a live album, recorded at Larry’s Hideaway in Toronto, Canada in July 1983, around the time of the record’s release. The live set includes two songs which would end up on “Reckoning” – “Harborcoat” and “7 Chinese Brothers” – and one, “Just A Touch”, which would not surface until 1986’s “Lifes Rich Pageant”.

The gig also features a cover of The Velvet Underground’s “There She Goes Again”.


Murmur will be re-released in the UK on February 9.

The tracklisting is:
Disc One:
Radio Free Europe
Pilgrimage
Laughing
Talk About The Passion
Moral Kiosk
Perfect Circle
Catapult
Sitting Still
9-9
Shaking Through
We Walk
West Of The Fields