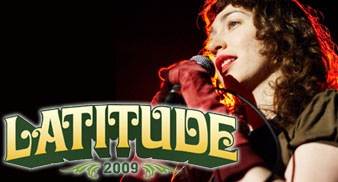 The Bronx raised multi-instrumentalist singer will be bringing her combination of blues, jazz and punk to the open air arena at Henham Park.

Also announced for the July festival, is the first act for the Sunrise Arena, the stage for hotly-tipped new acts; Massachusetts Passion Pit. The pop electronica group will play on Saturday July 16.

Latitude, now in it’s fourth year is also jam packed with even more theatre, dance, comedy and poetry than ever before.

Sadler’s Wells, the Royal Opera House, National Theatre, Royal Shakespeare Company, and The Bush theatre group will all be bringing their repetoire to Latitude this year, some of it bespoke for their surroundings.

This year will also see the Britten Sinfonia performing in the lush outdoor space.