The Jamaican musician died on Saturday 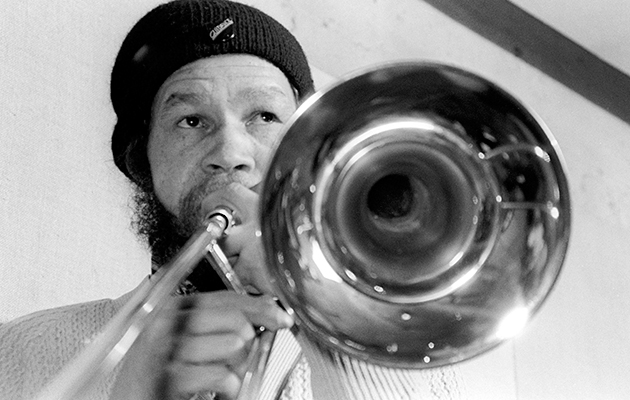 Jerry Dammers has released a tribute to Rico Rodriguez, who died aged 80 on Saturday [September 4, 2015].

The Jamaican trombonist is perhaps best known for his work with The Specials. But he played on numerous key ska and reggae singles, as well as recording his own albums.

Born in Kingston, he played on a number of early ska singles – including The Folks Brothers’ “Oh Carolina” – before moving to the UK in 1961.

He worked as a session musician played on many reggae singles, including Dandy Livingstone’s “Rudy A Message To You“. He also recorded and toured with Prince Buster.

In 1977, he recorded Man From Wareika. His other solo credits include Blow Your Horn and Brixton Cat with his band Rico and the Rudies.

In 1979, he was invited by Jerry Dammers to play on The Specials’ version of “Rudy A Message To You” and continued to play with the band until 1980. His relationship with Dammers’ Two-Tone label continued and he played on The Selecter’s debut album, Too Much Pressure. Two Tone also released his albums That Man Is Forward and Jama Rico.

In recent years, he played with Jools Holland’s Rhythm And Blues Orchestra.

His death was announced by The Specials..

Our dear friend Rico passed away today.We offer our deepest condolences to his family.His legacy will go on forever and a day. RIP dear Rico

Among the many tributes paid to Rodriguez, Elvis Costello remarked, “What a moment it was to hear him play on ‘Rudy’.”

My condolences to his family and my friends in The Specials at the loss of the great Rico. What a moment it was to hear him play on "Rudy"

“It’s hard to express how sad I feel about the death of Rico Rodriguez yesterday. He taught me so much about what a proper musician is supposed to try and do. For me, getting to play with him was one of the greatest things about the Specials. His album ‘Man from Wareika’ had been one of my all time favourites and a great inspiration. I could not believe that he had agreed to play with us, and his contribution to the Specials was immeasurable. He provided an all -important link to authentic Jamaican ska and reggae, which we had tried to copy, and his trombone added the essential element which took us to a next level and helped offer the band a possibility of progression beyond the confines of punk.

“To me his majestic solo on the 12” version of Ghost Town is the musical highpoint of The Specials and when I play it as a DJ it still elicits cheers from audiences, as the beginning of any Rico solo always has done live. When the Fun Boy Three left The Specials it seemed like the most natural thing in the world for the bassist, drummer, and myself to follow Rico and his constant companion, trumpeter Dick Cuthell. We toured as his backing band in Germany and Europe for a while.

“Rico’s time with The Specials was only a small part of his huge musical achievements and international reputation. Already a legend in Jamaica, along with Dandy Livingstone and a few others, he had been an ambassador of reggae music to Britain in the 60’s, amongst the first to play it live and record it in this country. A student of the legendary Alpha school in Kingston Jamaica, where very strict nuns taught music to boys from the poorest of backgrounds, Rico has stated that he then saw his role as using his trombone to express the suffering, and the aspirations of his people for a better and more just world. This was no less powerful being in an abstract way, with an instrument, than if it had been a singer using lyrics. His intentions in music were always very serious and dedicated.

“Rico’s playing was influenced by jazz, but was not jazz, and combined all the influences of the Caribbean, from mento, calypso and Cuban music, to folk music, blues, and African traditions which had survived doggedly through 400 years of slavery -most notable in this respect was the Nyabinghi drumming of Count Ossie in the Rasta community of Wareika Hills, of which Rico was a part.

“At the last gig he ever did, where Rico could no longer play his trombone, but still continued to sing as other musicians played his music, the legendary Jamaican producer Bunny Lee said Rico was just as responsible as his fellow Jamaican trombone legend Don Drummond, in creating the iconic sound which for a while made the trombone virtually the national instrument of Jamaica , eventually playing it’s part in making reggae probably the most popular music in the world. Rico’s band supported Bob Marley on tour internationally at the height of their success. Rico received the highly prestigious Jamaican Musgrave Medal for art, as well as an MBE in this country.

“I think it was the incredible mixture of joy and sadness at one and the same time in his playing, which gave it its power. The mournful and melancholic sound of sufferation , the humour and joy of living , and the righteous anger and defiance of the poor and oppressed people of Jamaica , all combined in a highly melodic way with no unnecessary frills. Rico said the silences in music were just as important. His playing could break your heart and make you smile and determined, all at the same time. I will greatly miss him, as will many people around the world.”