Another store bites the digital dust 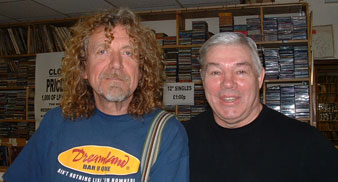 Reddington’s, a collectors’ record shop, is closing down after 40 years’ trading, citing as causes spiraling overheads and the increasing dominance of the internet.

Owner Dan Reddington says the choice of records available on sites such as Ebay make running a shop impossible.

He told the Birmingham Post, “If you search The Beatles or Elvis you are going to get more than 10,000 [results] and we just cannot compete with that.”

The much-loved Birmingham record shop is a collectors’ paradise with a back catalogue of more than 100,000 records. The shop has helped many a local rocker find the vinyl they’ve long been searching for.

Plant, on hearing of the store’s closure, popped in to pass on his best wishes to owner Dan Reddington – he’s been shopping there for rare blues, rockabilly and rock’n’roll records for years.

This is the second recent incident involving Plant helping out in his local community, following the story, reported last week on uncut.co.uk, that he is to help his neighbour raise cash for an operation.

A musical show, an homage based on the Reddington’s shop, will take place at the Alexandra Theatre, Birmingham in November 2007.

Bev Bevan has been confirmed to play. Live appearances by other musicians that have shopped there are also likely.

Reddington Records are still trading via their website(s).

As Dan says, “If you cant beat them, join them.”