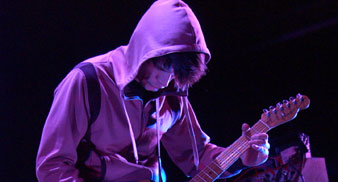 Radiohead guitarist Jonny Greenwood is set to score a new film, which is titled The Master.

The film is a drama set in the 1950s and is confirmed to star Philip Seymour Hoffman, Amy Adams and Joaquin Phoenix. It is due to be released sometime in 2013. The film is being directed by Paul Thomas Anderson, who also made There Will Be Blood, for which Greenwood also provided the score.

The guitarist has worked extensively in film scores in recent years, writing music for both We Need To Talk About Kevin and Norwegian Wood as well as documentary Bodysong.

Greenwood is set to work with jazz group Zed U on ‘The Master’ score. Manager of the group’s record label Oliver Weindling actually broke the news of Greenwood’s involvement in the project, tweeting via Twitter.com/babellabel: “Zed-U recorded part of soundtrack for Jonny Greenwood of Radiohead last week. Film (by Paul Thomas Anderson) to appear in 2013”.

Radiohead released their latest studio album ‘The King Of Limbs’ earlier this year and are set to tour the world throughout 2012, with live dates beginning in late February and ending in November.

The band have already announced two European festival appearances, a 10-date North American tour for February 2012 and five shows across Europe for June and July, but have yet to schedule any UK shows. These are expected to be announced in the coming weeks.