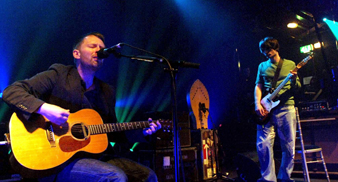 Radiohead have officially confirmed that their seventh studio album has been completed, and that it will be available for download in just ten days’ time.

The announcement that the album, entitled ‘In Rainbows‘ is ready comes after previous speculation by fans last week, when a series of hieroglyphic codes appeared on a hoax websiteclaiming to be by the band and saying the LP was ready.

A message posted yesterday by Radiohead guitarist Jonny Greenwood on the official band read: “Hello everyone. Well, the new album is finished, and it’s coming out in 10 days; We’ve called it ‘In Rainbows’. Love from us all. Jonny.”

The website links to the album release’s pre-order form – where details are given that the new release will be available as a download purchase from October 10 – while a ‘discbox’ containing two 12″ vinyl records plus CD will be available for shipping from December 3.

The band who have been without a record label since completing their EMI contract have also announced that they are to leave it up to their fans to decide how much to pay for the highly anticipated new album via the download only format.

They will leave the price field blank on the pre-order form.

The heavyweight vinyl set will cost £40.

The album will for now only be available via the band’s official website. A ‘traditional CD release’ is being planned for early 2008.

The tracklisting for ‘In Rainbows’ is:

Plus a further eight new Radiohead tracks will be available on the second CD, included in the discbox: