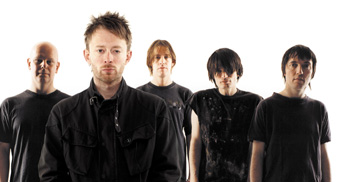 The show was titled ‘Thumbs Down’ and featured the band making thumbs-down signals throughout.

“This is ‘Thumbs Down’,”explained singer Thom Yorke helpfully. “This is our way of celebrating the fact that we finished a record. We’ve been doing some stupid stuff really for a couple of weeks, knocking some stuff together. Don’t expect any quality level cos there is none, except when of course when the professionals are involved and there are a couple here because frankly we need ’em.”

Radiohead performed a bunch of songs from their excellent “In Rainbows”, plus cracking covers of New Order‘s “Ceremony” and The Smiths‘ “The Headmaster Ritual”.

Most of the action took place in their studio, though a clip for the track “15 Step” used an extended clip from the David Fincher movie “Se7en”, replacing Gwyneth Paltrow‘s head in the box with that of a cheerfully singing Thom Yorke.

The band also DJed throughout the broadcast. Here’s their playlist: