The band premiere 'Accelerate' at the ICA's 60th birthday celebration 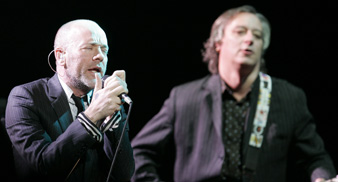 R.E.M showcased nine songs from the new record which is due for release next Monday (March 31).

Starting with ‘Living Well Is The Best Revenge’, they also played the album title track and new single ‘Supernatural Superserious’.

The group also found time to play old classics including ‘Losing My Religion’, ‘Drive’ and 2005 hit ‘The Great Beyond’.

Guitarist Peter Buck revealed that prior to the show he had been arguing with John Paul Jones about what year he had performed at the Albert Hall with Led Zeppelin.

As previously reported, the band are also playing an intimate iTunes Live Session at London’s Apple Store on Regents Street this Wednesday (March 26).

R.E.M. then return to the UK for some Summer stadium dates at the following places: