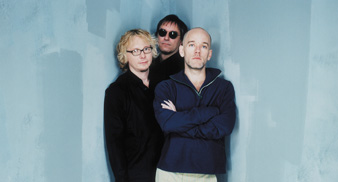 R.E.M. release their first ever live album on October 16.

Titled with barnstorming simplicity, R.E.M. Live is a two-CD plus DVD set recorded on february 27 at Dublin’s Point Theatre during the band’s 116-date 2005 world tour.

Content for the show spanned the band’s 27-year career, although the bulk of the playlist was drawn from their then current Around The Sun album. The set also features the previously unreleased I’m Going To DJ.

The full track listing for the album is:
I Took Your Name
So Fast, So Numb
Boy In The Well
Cuyahoga
Everybody Hurts
Electron Blue
Bad Day
The Ascent Of Man
The Great Beyond
Leaving New York
Orange Crush
I Wanted To Be Wrong
Final Straw
Imitation Of Life
The One I Love
Walk Unafraid
Losing My religion
What’s The Frequency, kenneth?
Drive
(Don’t Go Back To) Rockville
I’m Gonna DJ
Man On The Moon