Queen Musical Sequel In The Works

Brian May says: We Will Rock You (Again)! 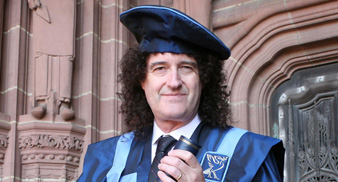 A sequel to the hugely successful Queen musical We Will Rock You is being planned.

Queen guitarist Brian May spoke about the musical based on the band’s songs which was written in collaboration with Ben Elton, as he attended his induction ceremony becoming a Chancellor of Liverpool John Moore’s University.

May said: “I think about two million people have seen it, I can’t believe it that whenever I go in (to the theatre) the place is full. We are planning the sequel. It is a real challenge.”

As previously reported May is taking over from Cherie Booth QC as the University’s Chancellor.

The guitarist also spoke about the band’s forthcoming Cosmos Rocks tour and first studio album in thirteen years, with Paul Rodgers on vocal duties once again. He said: “The long arm of Queen has pulled me back in at the moment. We’ve pressed the button to go on tour this autumn so already the preparations are very consuming.

He added that’s a really busy time:”We are finishing an album. We’ve chosen our set, we’ve chosen our environment on tour. It is very exciting, very time consuming but Queen always was consuming.”