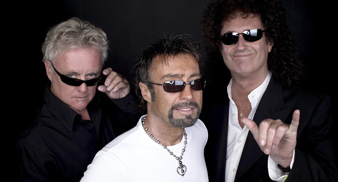 Queen have recorded their first new studio album, bearing the ‘Queen’ name in thirteen years, and it is due for release on September 1.

Brian May and Roger Taylor have recorded the new as-yet-untitled album with Paul Rodgers, the singer/musician who joined them for their 2005/6 world tour.

The album, which has been jointly written and produced between the three of them, features the previously released ‘Say it’s Not True’ — the band’s benefit song for Nelson Mandela’s 46664 HIV AIDS charity last World AIDs Day.

The new album is also set to feature Queen’s first ever ‘cover version’.

Queen + Paul Rodgers will head out on a 28-date arena tour two weeks after the album is released, visiting fourteen countries.

Six dates in the UK kick off at Nottingham Arena on October 10. The band will also play Glasgow, London, Cardiff, Birmingham and Liverpool.

Tickets for all UK dates will go on sale at venue box offices and usual ticket agents from Saturday April 5.

Pre-registration for tickets will be available from Wednesday April 2 at www.queenonline.com