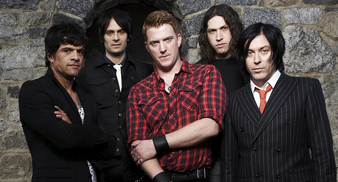 Queens Of The Stone Age played the second main stage headline slot at the Reading Festival tonight (August 22), telling the crowd that this would be one of the last times they would play material from current album ‘Era Vulgaris.’

Playing to one of the most receptive crowds of the day (the other being a neon blue denim jeaned and naked-chested Biffy Clyro), the band zipped through songs from throughout their career, including “Regular John” from their debut.

Band singer Josh Homme declared the festival crowd one of the ‘best in the world’ and said that they wanted to bring their current live showcasing of their album to an end somewhere like this.

Being followed by the reformed Rage against the Machine was a challenge, but QOSTA rocked. They are set to play the Leeds Festival on Sundauy (August 24).

The Queens Of The Stone Age set list was: