Public Enemy’s Chuck D Gets Down With The Foundation 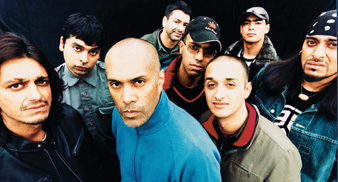 The ragga/punk/hip hop/drum’n’bass and rock collective have had a diversely amazing time as a foundation. Their lives shows are acclaimed and ADF have been chosen no less than three times to play at London’s Meltdown festival. Curators David Bowie, Lee Scratch Perry and Scott Walker all picked them to play on separate occasions. No other band has achieved this feat.

The bonus disc’s highlights are two live tracks recorded at ADF’s 2004 Somerset House show, when Public NME’s Chuck D joined them onstage for amazing versions of “Black Steel In The Hour Of Chaos” and “Son Of A Bush.” These two blistering tracks have never been made available before.

ADF are currently finishing up their as yet-yet-untitled new studio album which is due for release late summer.

“Time Freeze” is released on April 30 through Rinse It Out/EMI.