Singer triumphs ahead of Radiohead, Bon Iver and Fleet Foxes to win award 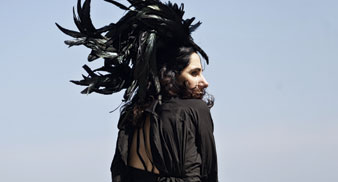 The album, which is the singer’s 10th studio record, also won the Barclaycard Mercury Prize earlier this year and was given the maximum 10 out of 10 by NME when it was in February.

The album was selected as the winner by a seven-person judging panel which included comedian Stewart Lee, folk singer Linda Thompson and Uncut editor Allan Jones.

PJ Harvey said of winning the award: “I’m very pleased to get the Uncut Music Award 2011, and it strengthens my desire to carry on pursuing the avenues of work I have been for the last 20 years. It strengthens my conviction to always trust my instincts and to continue to do work of meaning and importance, in some way.”

The singer also said that she was well into the writing process for the follow-up to ‘Let England Shake’, saying: “I’m quite far into working on what will become my next body of work, and again my desire of wanting to learn continues to unfold. I began working on my next piece the moment I finished recording ‘Let England Shake’ over a year ago. I’m well into that next project already”.

To read a new interview with PJ Harvey and for more details on the deliberations of the Uncut Music Award 2011 judging panel, pick up the new issue of Uncut, which is on UK newsstands now or available digitally.

The full transcript of the judging panel’s discussions about the albums will also be published on Uncut.co.uk. You can read more about the award by visiting the official Uncut Music Award Blog.