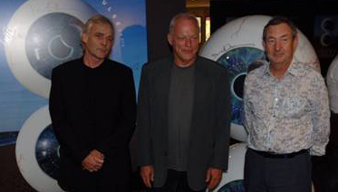 Pink Floyd‘s Roger Waters and Dave Gilmour reunited on stage tonight (May 12) in London for the first time since 2005.

Waters was joined by Gilmour at his show at the O2 Arena in the UK capital for Floyd song ‘Comfortably Numb’. The last time they had appeared on stage together was at the Live 8 concert in London six years ago.

The show was the second of Waters’ O2 Arena run this month, having played the venue last night too. He has four more gigs scheduled there before he moves on to play two shows at the Manchester MEN Arena, on May 20 and 21. The frontman is billing his European tour as ‘The Wall Live’, with the show based on Pink Floyd’s 1980/81 tour of their 1979 album ‘The Wall’.

Waters has said that that the tour, which sees a 240ft-wide and 35ft-tall wall being dismantled throughout the show, will most likely be the last time he does anything of a similar scale. “Constructing something like this indoors – I’ll probably never do anything this big again, the technology of projection we’ve used in this show is breathtaking,” he said.

He added: “When we split up David and Nick [Mason, drummer] ended up with the name [of the band] and I ended up with ‘The Wall’ and everything to do with it and a few quid.”