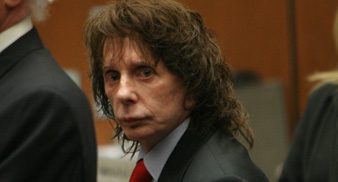 An appeal by Phil Spector‘s lawyers against his 2009 murder conviction has been rejected.

A three-judge panel at California‘s 2nd District Court of Appeal upheld his sentence over the killing of actress Lana Clarkson in 2003. This comes after his legal team [url=http://www.nme.com/news/phil-spector/56088]urged the court to throw out his original sentence on the grounds it was prejudiced[/url] by testimony from five women who claimed to be victims of gun-related incidents with the producer in the past.

“The evidence showed that, when fuelled by alcohol and faced with a lack or loss of control over a woman who was alone with him and in whom he had a romantic or sexual interest, Spector underwent a sharp mood swing,” they said.

In addition the producer “exhibited extreme anger and threatened the woman with a gun when she refused to do his bidding,” according to an 81-page ruling by presiding judge Joan D Klein and two other justices.

The judges found that the evidence was “admissible to prove that the cause of [Lana] Clarkson‘s death had neither been an accident nor a suicide”, reports AFP.

His first was declared a mistrial after jurors were deadlocked.

The producer, who created the famed “Wall of Sound” recording technique during the 1960s, is not eligible for parole until 2028. If he is not freed then under California law his sentence will become a life term.