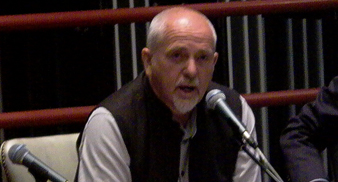 Peter Gabriel has teamed up with high tech speaker company Bowers & Wilkins to launch a new monthly subscription based online music club, delivering albums to members from new and established artists each month.

Speaking at the press launch at his Real World Studios, where artists will record albums live, the former Genesis front man said that the exclusive albums will be delivered as ‘a lossless file format’ and ‘un-compressed’ to give listeners the highest sound quality available.

Gabriel said at the launch, that all the albums will come DRM-free and that he “hopes people copy the albums and share them with friends” and listen to them in whatever way they want, whether on their laptops, iPods or CD stereos.

He added: “One of the things that’s frustrating about the digital revolution – of which I am a huge fan – is that the audio quality has taken a giant step backwards. A lot of what we hear on iPods and so on is super-compressed and people have got used to this. For those of us who have really worked hard to get things to sound good and full and rich and build landscapes out of sound, it’s very frustrating, so I’m very happy that with these Music Club releases are going to be without compression and full quality.”

The online project will offer free studio time, mixing sessions and will also return all rights back to the artists involved, with each exclusive album costing less than £3 each across a whole year.

As well as new and unsigned bands, it is hoped that more established acts will get a chance to collaborate on side-projects and collaborations.

Gabriel has also commented: ” It’s unique as far as I know and it’s going to allow a lot of interesting projects to happen. One of the things I am hoping with this digital revolution that’s happening is that all sorts of projects that may not make it through but are really interesting musically that have died on the side, with this project (and I hope a lot of other things on the internet) it’s going to be possible for people – either starting off or trying something different – to find an audience this is going to be open to interesting music.”

Transglobal Underground‘s Nick Page has also created a new project ‘Dub Colossus in A Town Called Addis‘, bringing some of Ethiopia’s most talented musicians to the UK to record at Real World.

More details and to sign up for a free trial membership, take a look at the B&W website here: www.bowers-wilkins.com/sos.