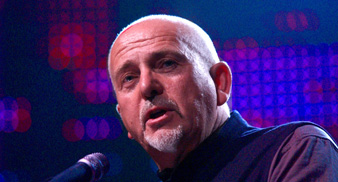 Peter Gabriel made a rare WOMAD headline appearance on the Open Air stage at this year’s festival in Wiltshire, on Saturday July 25.

The legendary musician, who co-founded the festival in 1982, but has rarely played at it, performed a 90-minute set which included a cover of Paul Simon‘s “Boy In The Bubble”.

Gabriel’s one-off UK show was in aid of raising money for human rights organisation Witness, as the former Genesis front man explained: “Some of you might know I have been with Witness.org for some time and I promised to do some fundraising this year.

Talking about his current musical project, Gabriel says he’s hoping to ‘swap’ songs with people: “I have been doing a project called ‘Scratch My Back‘, which is a song exchange. I tell artists I will do one of their songs if they do one of mine.”

Other highlights of Peter Gabriel’s WOMAD set included “Biko”, “The Book of Love” and “Solsbury Hill” all of which had the crowd singing along.