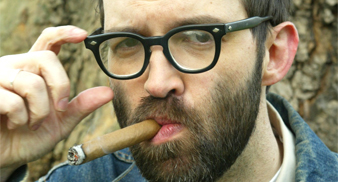 Eels were joined by The Who‘s Pete Townshend last night (July 17) in London, as frontman and songwriter E performed a solo show to celebrate the release of his autobiography.

Mark Everett played a number of tracks, including “I Like Birds”, “Somebody Loves You” and “Bus Stop Boxer”, and fans read out excerpts from his book “Things The Grandchildren Should Know” at London‘s St James’ Church.

Townshend was called up by E – who referred to him as just ‘Pete’ – to read a section of the autobiography.

In other news, Eels are also set to screen an advert during the US Superbowl on February 3, advertising their rarities and b-sides collection, “Useless Trinkets”.

However, due to the extortionate rates for advertising during the much-watched game, the band can only afford a second of advertising time.

The band have paid $100,000 for the advert, which will feature frontman and Eels mastermind E saying the letter ‘u’.

The rest of the advert will be available to watch on the internet after it has screened.