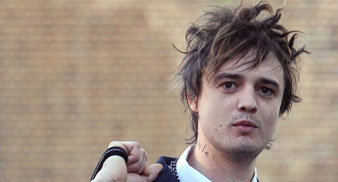 Singer Pete Doherty has been released from jail at London’s Wormwood Scrubs this morning (May 6) after serving just 29 days of a fourteen week prison sentence for drug and driving offences.

The Babyshambles frontman, showed off a certificate proving he was clean of drugs, when he was released at 7.10 this morning.

Doherty told waiting reporters that he found the Scrubs’ medical facilities difficult to deal with. He commented: “Well, I knew it was going to be a bit rough to start with, with the overcrowding and the medical facilities. Although they do their best – they are good, they can’t really cater for the average junkie.”

Holding a diary that he had kept whilst serving his sentence, the musicaian also joked that the worst aspect of being jailed was “Gangsters and Radio 4, basically.”

Whilst inside, Doherty missed what would have been the biggest solo gig of his career, at London’s Royal Albert Hall.

However his early release from prison means that he will be able to perform at a scheduled gig at this year’s Glastonbury festival.