Doherty is currently serving at Her Majesty's Pleasure for cocaine possession 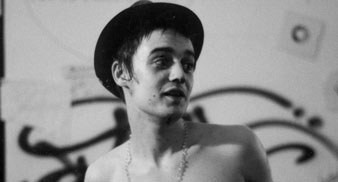 Pete Doherty is said to be facing another prison sentence after allegedly breaking into a shop and robbing the contents in Regensburg, Germany earlier this year.

The owners of the music shop, from which The Libertines singer allegedly stole a guitar and record, are said to be pressing charges against him.

Doherty has admitted to smashing the shop window, but says he doesn’t remember stealing anything, as he was drunk at the time, reports The Sun.

The stolen goods were found after the incident in the Regensburg main square. Doherty had been staying in the town to shoot his part in the film Confessions of a Young Contemporary. Starring opposite fellow musician/actor Charlotte Gainsbourg, Doherty was playing French poet and novelist Alfred de Musset.

Doherty, who is currently serving time for cocaine possession in the UK, could face up to five years if he is found guilty of the theft and breaking and entering charges.
Latest music and film news on Uncut.co.uk.