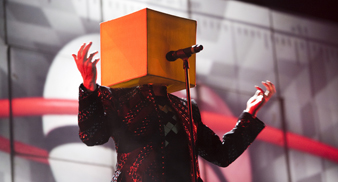 Pet Shop Boys cheekily covered Coldplay’s “Viva La Vida” as part of their headlining set at Latitude Festival on Friday night. Having pricked U2’s bubble of pretension 20 years ago with their version of “Where The Streets Have No Name”, Neil Tennant and Chris Lowe directed their ironic wit at Chris Martin by re-imagining his band’s worldwide chart-topper as a hi-energy disco classic.

As Lowe punched the requisite keys for the intro to their own “Domino Dancing”, Tennant strolled onto the stage wearing a crown and cape, and the music segued into the Coldplay track. The singer ran through a series of outlandish hand gestures, while regaling a packed Obelisk arena of how things were “when I ruled the world”.

The surprise cover was a highlight of a 90-minute set that mixed a string of big hit singles with a liberal smattering of tracks from their most recent album, Yes.

Heart
Did You See Me Coming
Pademonium
Can You Forgive Her?
Love, Etc
Building A Wall
Go West
Two Divided By Zero
Why Don’t We Live Together?
Always On My Mind
Left To My Own Devices
Do I Have To?
Kings Cross
The Way It Used To Be
Jealousy
Suburbia
All Around The World
Se A Vida E
Domino Dancing
Viva La Vida
It’s A Sin


Uncut will be bringing you news, reviews, blogs and pics from Latitude 2009 for the next three days : Stay in the loop with festival news at our dedicated blog here.

Feel free to send us your comments via Twitter. Your observations will be published here at uncut.co.uk .