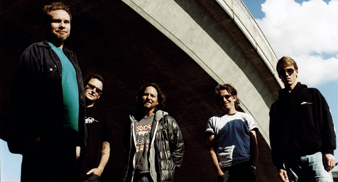 The album features 18 songs recorded live between 2003 and 2010 by the band’s engineer John Burton, and newly remixed by Brett Eliason.

The album is the follow-up to the band’s 1998 live album, ‘Love On Two Legs’. See Liveontenlegs.com for more information.

The tracklisting of ‘Live On Ten Legs’ is: