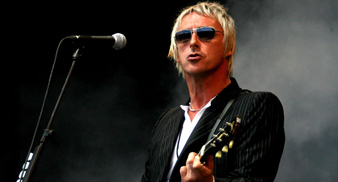 Paul Weller is the winner of the Uncut Music Award 2010. His album, “Wake Up The Nation”, is the third winner of the prestigious award, following the triumphs of Fleet Foxes and Tinariwen in 2008 and 2009.

“I’m well surprised to get this award,” said Weller, on tour in America when he heard the news. “Pleasantly surprised. A lot of the credit goes to Simon Dine (producer and co-writer on the album). The album came from him, really. He had these very rough backing track ideas, which he sent me. Once I heard them, I got excited too. I could see a whole new sound emerging out of them.”

To read the judges’ discussion on “Wake Up The Nation”, click here.

“Wake Up The Nation” came out on top from a shortlist of eight exceptional albums. “Plastic Beach” by Gorillaz was selected as runner-up, followed by Joanna Newsom’s “Have One On Me” in third.

For the full story on the Uncut Music Award – and an extensive new interview with Paul Weller – see the new issue of Uncut, on sale now.