Paul Weller: “I’m more prolific than I’ve ever been” 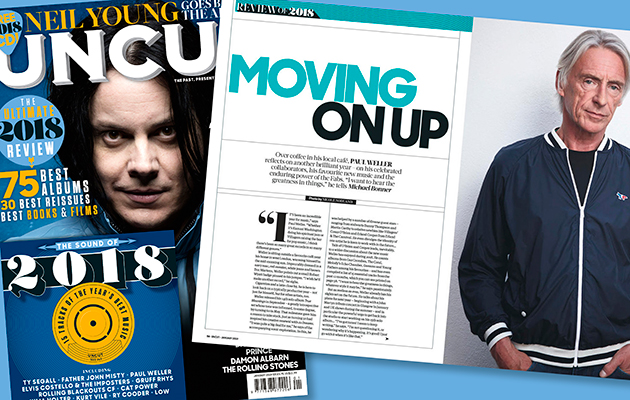 The new issue of Uncut – in shops now or available to buy online by clicking here – features our comprehensive look-back at the music (and films and books) that defined 2018.

There’s also a revealing new interview with Paul Weller in which he discusses the year in music – covering both his own True Meanings album and the other artists who continue to inspire him – as well as his thoughts on turning 60 and what’s next for this restless songwriter. Read an extract from the Q&A below:

I suppose you’re already halfway through your next album…
I’ve got tunes! I’m at the demo stage. I’ve got eight pieces on the go – whether they’ll all make it or not, I don’t know. But I can’t stop writing. It’s been pretty consistent since 22 Dreams. In some ways, I think it’s fair to say I’m probably more prolific than I’ve ever been. I seem to have more ideas these days. I don’t know why that should be.

How much does having a young family change your working methods?
Me now, I’d be quite happy if I was going in the studio next week to start working on a new album. But I can’t, for family reasons. So it’s about finding a balance. Trying to stay on the creative tip but at the same time, doing my family duties as well. It’s plate spinning.

I’d have thought you’d have had a routine by now.
I play almost every day anyway, just to keep my  chops in. So every night, when everyone’s gone to bed, I’ll keep chipping away at these songs, write a new thing, whatever it may be. I keep all these ideas stored on my phone until I’ve got time to go in and get them out.

The iPhone is a gift to musicians, isn’t it?
I wish I’d had it years ago! I didn’t have anything to record on back in the day. I used to keep playing the songs over and over until I had the sequence in my head. I always thought if they’re good enough, I’ll remember them next day.

How much did turning 60 overshadow the year?
I don’t think it overshadowed anything, but it was quite monumental. It made me extremely reflective. I’ve taken stock of a lot of things about myself, as a person.

What did you learn about yourself?
I behaved badly in the past, when I was pissed or out of it. It makes me cringe, thinking back to when I’ve been rude or aggressive towards people. I like to think I’m getting better as a person, but I’ll probably only know that for sure in 10 years’ time. It’s all about self-improvement for me, life. Not just as a writer, but as a person and a father. All those things, man. Be true to yourself. Find yourself, be at peace with yourself – which I think I finally am. You can’t make up for past mistakes, you can only hope to learn from them and move on. All of that fed into the making of True Meanings.

Did you have a good party?
I went out with the kids and my family to a little Ethiopian restaurant near us. That was good enough for me. I was going to do a joint party with my mate Steve Brookes. I’ve known him forever, we started The Jam together. His birthday is the day after mine. But we didn’t fancy it in the end.

So how autobiographical is True Meanings?
Some of it might start off being autobiographical,  but I have to broaden it out to make it appeal to other people. I wouldn’t have an interesting enough life to write about myself all the time. Most of the time I’m just going up to Tesco’s or down the park. There’s always grains of me in it.

Do you have an example of anything on the LP?
Funnily enough, “White Horses”. Although Erland Cooper wrote the words, it struck a chord about the cycle of life: what you’ve inherited from your parents and pass on to your kids. That could have been me writing about myself. But it wasn’t. It was someone else doing it, which I thought was really interesting.

You can read much more from Paul Weller, in the new issue of Uncut, out now.