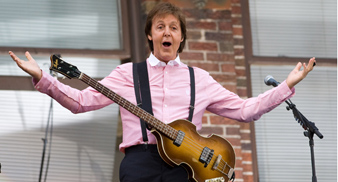 Paul McCartney is to release a double live album and DVD called ‘Good Evening New York City‘ on November 17 in the US and November 23 in the UK, it was announced on paulmccartney.com on Wednesday (September 30).

Recorded over 3 nights, when the former Beatle played at Citi Field in Queens, New York from July 17-21 this year, the double live album includes several Beatles tracks including “Let It Be,” and “Hey Jude,” Wings tracks as well as solo material. McCartney performed 33 songs each night to around 120,000 fans each show.

In a press statement, McCartney says of the outdoor shows: “It was three great nights for the band and for me personally it was very exciting to be back opening a new stadium on the site of the old Shea Stadium where we had played 44 years previously. Even more exciting because this time round you could hear us!”

The deluxe edition of ‘Good Evening New York City‘ also includes a 34 minute DVD of McCartney‘s performance for the Late Show With David Letterman – on the marquee of the Ed Sullivan theatre (pictured above).

‘Good Evening New York City‘ is Paul McCartney‘s second
album release for Hear Music in the US, after releasing ‘Memory Almost Full‘ in 2007.