Patti Smith to write screenplay based on her book ‘Just Kids’

The punk icon is reworking her book into a movie 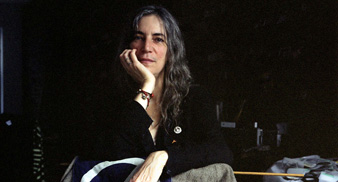 Patti Smith is set to adapt her best-selling book Just Kids for the big screen.

The punk poet and songwriter will work with Oscar nominated screenwriter John Logan on the screenplay, which they are writing on spec, rather than for a distributor, reports Deadline.com.

The book – which is based on Smith‘s relationship with the late photographer Robert Mapplethorpe – won the 2010 National Book Award for Non-Fiction over in the United States.

Patti Smith is to release a new ‘Greatest Hits’ compilation on September 12. The 18 track long ‘Outside Society’ spans Smith‘s entire body of work, from her 1975 debut all the way to her cover of Nirvana‘s Smells Like Teen Spirit in 2007. The special package will also feature brief recollections of each song written by Smith herself.

Smith has released ten studio albums across her career, the latest being ‘Twelve’ in 2007, which was a collection of cover versions of songs by artists including Jimi Hendrix, The Rolling Stones and REM.