Oasis Joined By Ricky Hatton At Start Of UK Tour

Noel Gallagher performs despite orders to rest his injured ribs 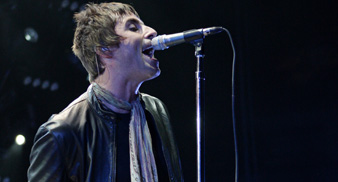 Noel, who seriously injured his ribs in the attack on September 7, has defied orders to rest for a further four weeks and the tour kicked off with an introduction on stage from boxer Ricky Hatton.

Hatton told the crowd: “They’re the best band in the world, and I’m proud to say, friends. If anyone tries to push them over onstage tonight they’re gonna have me to deal with!”

Oasis played tracks from throughout their career, including album tracks and B sides like “The Masterplan”, Noel also performed an acoustic version of “Don’t Look Back In Anger.”

Oasis’ tour is at the Liverpool Echo Arena again tonight (October 8), with futher sold out dates listed below.

The band are also due to headline the BBC Electric Proms
show, accompanied with a 50-strong choir at London’s
Roundhouse on October 26.

The band are set to play the following sold-out venues: