Oasis Joined by a 50-Piece Choir To Close Electric Proms

The band play most intimate show in years 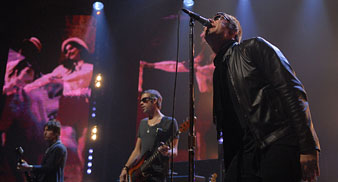 Taking a break from their current 18-date Dig Out Your Soul UK arena tour, Oasis brought their swaggering show to London’s Roundhouse, the most intimate sized show they’ve played in years.

The 20-track ‘greatest hits’ set, also saw the group joined by the 50-piece chorus on six songs, including “The Masterplan”, “Wonderwall” and “Champagne Supernova”, although for much of the songs, the choir were barely audible over the loudness of Oasis.

Liam Gallagher dedicated “Falling Down” to comedian Russell Brand who was in the audience, as was James Bond actor Daniel Craig who also got a shout out from the stage, prompting fans to chant “Bond – Who are ya?”

Noel Gallagher took the opportunity to take a pop at the current Bond theme tune “Die Another Day”, saying to the audience: “James Bond is upstairs, I might see if I can blag it so that he can get me the next James Bond theme tune instead of fucking dopey Americans doing it all the time”.

Highlight of last night’s collaboration was Oasis usual set closer, a cover of The Beatles’ “I Am The Walrus”, on which the choir really made an impact.

The song’s finale artfully incorporated Beethoven’s Symphony No 9 in D minor, the Ode to Joy (O Freunde) section, which is used at the end of the Beatles film Help! when Ringo is stuck in the pub cellar with a tiger.

The week saw over 100 artists such as Burt Bacharach, Africa Express, The Streets and Last Shadow Puppets perform across 12 venues in London and Liverpool.

You can watch performances from the five day festival, including Oasis on the BBC website here.