Second time lucky for the duo 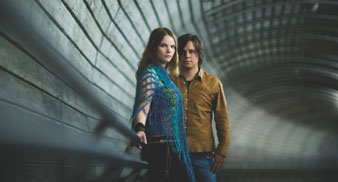 Adjagas have been confirmed as the opening act on Glastonbury’s main stage on June 22.

The band who take their name from a Sámi word; to describe the mental state experienced during transition from being asleep to awake- were originally invited to be the opening act at the festival in 2005.

Cancelled due to electrical malfunctions caused by the horrendous flooding that summer, fingers crossed weather won’t get in the way this time around.

The duo have been described by Uncut as “Hypnotic, open-ended and sweetly dolorous… Should hit the spot with fans of Bonnie “Prince” Billy, Sigur Rós and Cowboy Junkies”- and as well as a Glasto appearence have announced two other shows in the UK.

In May, Marielle Gaup and Lawra Somby, have also confirmed a London headline show at the Luminaire and will open for Nouvelle Vague at The Great Escape festival in Brighton.