No Win For Joy Division Biopic At BAFTAS 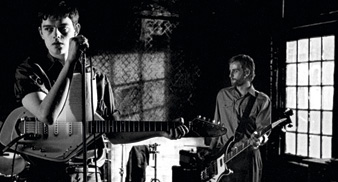 The acclaimed Ian Curtis biopic, Control, was one of the many unexpected losers at the BAFTAs last night (February 10).

The film, directed by Anton Corbijn, was nominated in three categories, including Best British Film, Samantha Morton for Best Supporting Actress and writer Matt Greenhalgh for the Carl Foreman Award For Most Promising Newcomer. In the end, only Greenhalgh won.

Control’s surprising lack of success was mirrored elsewhere at the awards. The British period drama, Atonement, had received 14 nominations, including Best Actor for James McAvoy, Best Actress for Keira Knightley and Best Director for Joe Wright. In the event, it won Best Film and an award for Production Design.

Despite these upsets, there were some more predictable outcomes. Daniel Day Lewis took another step closer to Oscar glory, winning the Best Actor award at the BAFTAs. This is the 17th award Day Lewis has won for his performance as oil magnate Daniel Plainview in Paul Thomas Anderson’s period epic, There Will Be Blood.

The key winners include:

Best British Film – This Is England

Best Actor – Daniel Day Lewis (There Will Be Blood)