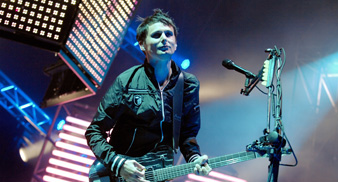 Fans were asked to vote on the first song to be played on NME Radio and
Muse’s ‘Knights Of Cydonia’ was chosen.

The band won a fierce online poll which saw 3.5 million fans of acts like The Killers, Oasis and The Strokes competed for the honour of being the first song played on air.

“Cheers, thanks a lot to all the voters,” declared Muse’s Matt Bellamy told NME.COM on learning the news. “Nice to know that shortly after the song finished on Earth, the galloping horses and laser beams would have reached Cydonia at the speed of light. Good new station, will be listening.”

To tune in simply head to Sky Channel 0184, Virgin Media Channel 975 or listen via NME.COM/Radio, where you will also find NME Radio’s schedule, information about the DJs plus details of how you can get involved with requests and more.