The 'board is inspired by the song, "Nature Boy"... 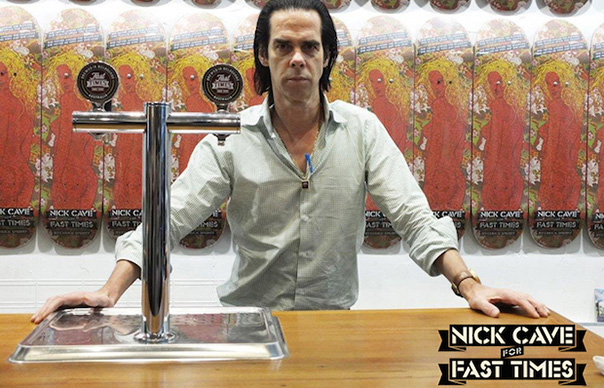 The ‘board is inspired by the song, “Nature Boy”…

Nick Cave has launched his own official skateboard.

According to Stereogum, Cave has teamed up with Australian skateboarding company Fast Times to produce the limited edition skateboard.

The boards are available to buy from Fast Times’ website priced AU$99.95.

Fast Times say: “True legend of Australian music, Good friend and Customer Nick Cave has teamed up with us to produce an exciting and rad collection! After discussing lyrics and a theme, It was agreed Nature Boy best suited the Melbourne Skate Scene and vibe of Fast Times. The Lyrics are taken from ‘Nature Boy’ A track from’s Nick’s ‘Abattoir Blues’ Album which also features on the accompanying Fast Times Skate clip.

“Once the mood was set Artist Chuck Sperry hailing from San Francisco worked with us to come up with a design, One of Chuck’s dames is seen tangled in her long golden locks wrapped in a psychedelic bed of flowers. The Boards feature a full wrap metallic graphic which feels and looks like an amazing piece of art.”