Get your tickets for the UK's most 'idyllic' festival now! 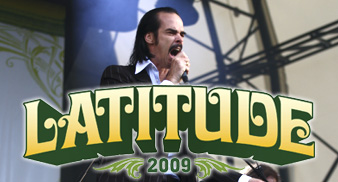 Nick Cave & The Bad Seeds, Grace Jones and Pet Shop Boys are to headline Latitude 2009, uncut.co.uk is thrilled to reveal!

Officially launched on Monday (March 23), Uncut is once again proud to host the festival’s second stage, the Uncut Arena, continuing a four-year partnership to stage a diverse array of music, from rock to jazz and blues.

Nick Cave returns to headline the fourth Latitude Festival which is set to take place at the idyllic Henham Park in Suffolk for three days from July 16-19.

Playing with his other band Grinderman at last year’s event, Cave was a highlight of the weekend. This year the Australian returns to the open-air Obelisk Arena with The Bad Seeds, drawing on their 14 album career (which have recently started, incidentally, to be remastered and reissued. The first batch of four are to be released at the end of the month.)

Doves, Editors and Bat For Lashes are also confirmed to play the festival so far.

As well as music, Latitude festival stages a huge array of theatre, comedy, book readings and poetry acoss the Henham Park grounds. This year will see the National Theatre, the Lyric Hammersmith and the Royal Shakespeare Company all put on bespoke shows throughout the weeekend. More details to follow.

Festival Republic Managing Director, Melvin Benn says: “Latitude Festival really is a focal point of the summer calendar now, and it’s only in its fourth edition! The level of success is fantastic and it never fails to please me that people have embraced it as much as they have.”

“Being able to bring together all the different aspects of the music and arts worlds is a fabulous achievement and it’s that commitment that sets Latitude apart from the other festivals around. This year we are excited to announce the involvement of some truly incredible performers and companies that inspire, innovate and entertain. I, for one, cannot wait.”

Once again BBC Radio 2, Radio 4, and 6Music will be broadcasting live from the site, bringing you round-the-clock coverage, as will, uncut.co.uk, of course.

We’ll also be posting news, information and artist blogs in the run-up to the UK’s best festival at our dedicated Latitude 2009 blog here.

For a full on, family-friendly three days of culture, get your tickets now via Uncut’s very own ticket link. Weekend tickets, including camping are £150. Day tickets are £60.