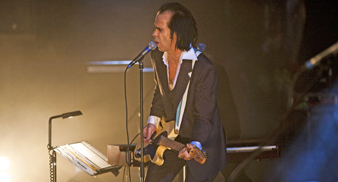 Last week Jim Sclavunos, who plays with both the Bad Seeds and Grinderman said that he and his bandmates had ‘neglected’ the Bad Seeds, but that it was ‘high time’ they started making music together again.

Speaking to Faster Louder, he said: “We have kind of neglected Bad Seeds of late… It’s been about four years since we have done anything and I think it’s high time we made some beautiful music together, again.”

The quotes follow Nick Cave’s [url=http://www.nme.com/news/grinderman/60920]onstage revelation, made earlier this month, that Grinderman were ‘over'[/url]. As the band closed their set at the Meredith Music Festival in Victoria, Cave said: “That’s it for Grinderman. It’s over… See you all in another 10 years when we’ll be even older and uglier.”

Sclavunos also spoke about the incident saying: “What happened at Meredith was more a bye-bye than an announcement. An announcement would be like a press release but who knows what will happen in five or 10 years’ time. My crystal ball is a bit low on batteries at the moment so I can’t predict what the future of Grinderman is – if there is a future.”

He continued: “The way I see it is it’s kind of our prerogative as musicians to do whatever we think is the right thing at the time and also to change our minds as we see fit.”

Last year Nick Cave And The Bad Seeds said they would be releasing a new album in 2011. Nick Cave said: “I have the starting date for the next record and that’s when I go into the office and start it… I’m not doing that until I’ve finished the Grinderman tour, which is amazing. The band is something else.”