Reformed band will play the UK capital in December 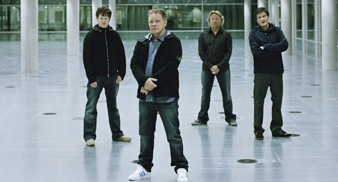 New Order have announced a one-off London show for later this year.

The band revealed that they had reunited earlier this year when they announced that they would play two benefit gigs, but also confirmed that bass player Peter Hook would not be part of their line-up.

The group, who now include keyboard player Gillian Gilbert and new bassist Tom Chapman, will play London’s Troxy venue on December 10. The gig will be New Order‘s first UK show for over five years.

Peter Hook has repeatedly expressed his unhappiness that the band have reformed without him, previously saying that he had vowed to “fuck over” his former bandmates in “any possible way” he can.

Hook is currently touring with his band The Light, who have recently been playing Joy Division‘s classic album ‘Closer’ as part of their set.

Tickets go onsale on Friday (November 4) at 9am (GMT). To check the availability of [url=http://nme.seetickets.com/Tour/New-Order?affid1nmestory] New Order tickets[/url] and get all the latest listings, go to [url=http://www.nme.com/gigs]NME.COM/TICKETS[/url] now, or call 0871 230 1094.