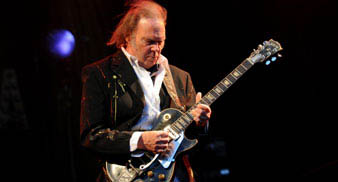 Dressed in a paint-splattered jacket and jeans, Young launched in the opener ‘Love and Only Love’ from his 1990 album Ragged Glory before playing an extended version of ‘Hey Hey My My’.

Young then surprised fans with a rendition of ‘I’ve Been Waiting For You’, from his first album before playing ‘Spirit Road’ and a furious ‘Fuckin’ Up’.

Switching to acoustic guitar midway through the set, Young played favourites from his 1972 classic Harvest including ‘Old Man’, ‘Heart Of Gold’ and ‘The Needle And The Damage Done’.

“I don’t play this very often. I don’t know why…” said Young.

For his encore, Neil Young performed an unexpected cover of The Beatles ‘A Day In The Life’.

The setlist:
Love And Only Love
Hey Hey, My My
Everybody Knows This Is Nowhere
I’ve Been Waiting For You
Spirit Road
Fuckin’ Up
Oh, Lonesome Me
Mother Earth
The Needle And The Damage Done
Unknown Legend
Heart Of Gold
Old Man
Get Back To The Country
Words
No Hidden Path
A Day In The Life