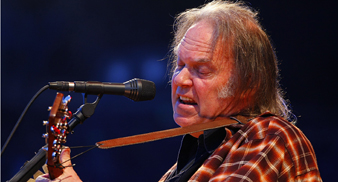 Neil Young headlined the final night of the Isle of Wight festival on Sunday (June 14) with his first UK performance of 2009.

Highlights of the set, which saw Young in a fun festival mood, included extended versions of “Hey Hey, My My (Into The Black) and “Rockin’ In The Free World.”

Sticking to familiar territory with the song list, to recent shows on this tour, Young teased the festival crowd saying he was looking forward to “cop a buzz” after the show.

Earlier on the Isle of Wight main stage, the Pixies paid homage to Young, who was on straight after, by covering the Bridge Foundation-inspired song “Winterlong” as part of their first UK show in nearly two years.

The Isle of Wight festival also saw artsists such as The Prodigy, Stereophonics and Maximo Park play.

Neil Young is set to return to the UK and Ireland from June 21, with two more festival headline slots; at Glastonbury and Hard Rock Calling.

From Hank To Hendrix
Mother Earth
Comes A Time
Heart Of Gold
Old Man
Hey Hey, My My (Into The Black)
Mansion On The Hill
Cinnamon Girl
Fuckin’ Up
Rockin’ In The Free World
Down By The River
A Day In The Life