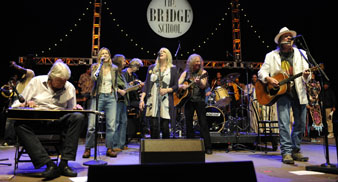 Ben Keith – the veteran steel guitar played who worked with Neil Young for nearly 40 years – has died, reportedly from a heart attack. He was 73.

Young himself appears to have broken the news onstage at a show in Winnipeg on Monday, July 26, dedicating “Old Man”, from the 1972 album Harvest, to his long-standing collaborator: “This is for Ben Keith. His spirit will live on. The Earth has taken him.”

Demme called Keith “an elegant, beautiful dude, and obviously a genius. He could play every instrument. … Neil has all the confidence in the world, but with Ben on board, there were no limits. Neil has a fair measure of the greatness of his music, but he knew he was even better when Ben was there.”

Keith had already made a name for himself as a major session musician in Nashville, playing on a string of hits including Patsy Cline’s “I Fall To Pieces”, before hooking up with Young in February, 1971 for the Harvest sessions.

Speaking to UNCUT in March 2009, Keith remembered his first meeting with Young. “He wanted a steel guitar player and I lived a couple of blocks from the studio. He’d already started the sessions, and I slipped in as quiet as I could and started playing along, and we cut five songs before I really met him. I didn’t even know who he was. I’d heard of CSNY, but I didn’t know he was doing a solo LP. He seemed like a good guy, as he did music like I do it – spontaneously.”

Young appeared similarly impressed with Keith, as he recalled on an interview in The Tennessean in 2005: “Ben and I developed the style during those sessions. When we did ‘Old Man’ and talked about what he could play, I said, ‘Try to play those single notes and make it sound doubled. Just ride those babies all the way through there, that’s a great sound.”

Keith went on to play on over a dozen Young albums, including On The Beach, Tonight’s The Night, Comes A Time, Prairie Wind, Chrome Dreams II, and became a mainstay of Young’s touring bands, excluding Crazy Horse.

Keith’s passing is another recent loss for Young. In January, his friend, film producer Larry “L.A.” Johnson, also died from a heart attack.