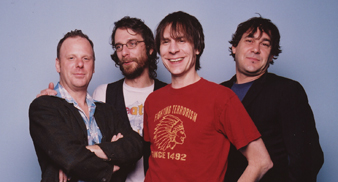 Mudhoney are to reissue their classic 1988 debut E.P. ‘Superfuzz Bigmuff’ as a deluxe edition as part of their 20th anniversary celebrations.

The remastered and expanded version of Superfuzz Bigmuff will accompany the band’s brand new studio album ‘The Lucky Ones’, their eighth for longterm label Sub Pop — who are also celebrating 20 years of releasing music.

The label, having failed to convince the band that the deluxe edition should be named “Superduperfuzz Biggermuff”, are releasing the EP on May 19 along with the new 11 track album, which was recorded in an efficient three and a half days.

The original Superfuzz EP features the classics “Touch Me I’m Sick” and “Mudride”. The expanded deluxe edition will also include singles, demos and two live recordings from 1988, all re-mastered, and some mastered for the very first time.

Mudhoney are to play just one show in the UK in 2008 — headlining London’s Forum on July 31.