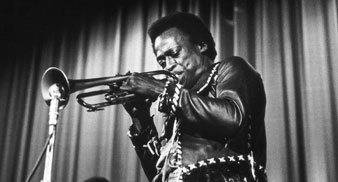 Soon to reprise his role as Basher Tarr in ‘Ocean’s 13’ Don Cheadle is in
talks to play jazz visionary Miles Davis in a forthcoming biopic.

While the film is still in its early stages and has yet to have a script written, Davis’ nephew Vince Wilburn, is adamant any film be respectful of his uncle’s life.

Accepting the late trumpeter’s award at the 21st Annual Rock And Roll Hall
Of Fame induction ceremony in New York last night, he is personally looking for a particular type of film.

The hope is for a script, which will “…touch on many things from the way he changed the wave of music of different decades from bee-bop to hip-hop and in between, and the personal side.”

Director of “Training Day,” Antoine Fuqua is rumoured to be in the frame to direct, but rumours abound Cheadle himself may direct, which would be the first time the Oscar-nominated actor has stepped behind the camera.