Family friendly show from the “Grace Kelly” star is a hit 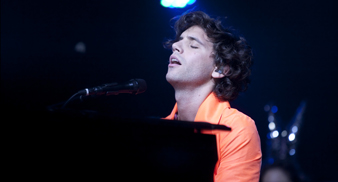 With the audience consisting largely of families, Mika’s set could perhaps be best described as being closer to pantomime, or a kids’ play workshop, than a gig.

Paper planes with “Throw these when you hear the words ‘Scooby Doo’” written on them were handed to throw in the air at the appropriate moment.

Mika also presented many opportunities for crowd participation, which clearly delighted many of the children in the audience.

Mock-complaining about the bass emanating from a nearby tent, Mika said to the crowd: “We will challenge them by being the quietest tent.” Cue much shushing from the children. Later, ahead of “Big Girl”, thunder sound effects resounded round the UNCUT Arena prior to a massive explosion of confetti into the air. As one parent observed, “All you need now is Widow Twankey to turn up, and it’s a full house.”

Although billed as an acoustic gig, Mika was joined on stage by a full band. In keeping with the colourful nature of the set, the backing singers wore tall headpieces covered in silver and glitter.

This was Mika’s first UK festival in almost two years. Clearly thrilled with the audience response, he climbed on to a monitor with a dustbin-like drum and began beating it at the start of “Lollipop”, before telling the crowd to jump up and down.

Uncut will be bringing you news, reviews, blogs and pics from Latitude 2009 for the next three days : Stay in the loop with festival news at our dedicated blog here.

Pic credit: Richard Johnson
On site all weekend, we will bring you up-to-the-minute coverage from the music, theatre, comedy and other arenas.

Feel free to send us your comments via the Latitude blog or Twitter. Your observations will be published here at uncut.co.uk .