Mick Jones, Wayne Kramer and Billy Bragg do Kick Out The Jams live in Camden 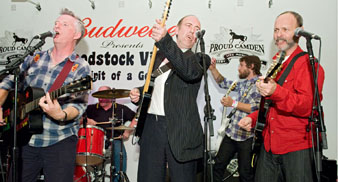 The event kicked off with the premiere (as part of the Raindance Film Festival) of the documentary film about the charity, called Breaking Doors – which highlights the work the charity does to help prisoners rehabilitate through music.

Several ex-prisoners, including Jonny Neesom and Leon Walker, who have benefited from the organisation, performed solo acoustic sets inbetween the other acts on the bill.

Foo Fighter‘s guitarist Chris Shiflett played solo, a diverse set of tracks, ending with a Scottish folk song, whilst highlight of the night was the grand finale which saw Mick Jones, Billy Bragg and MC5‘s Wayne Kramer all team up on the stage to do a thrilling rendition of “Kick Out The Jams”.

Lots of artists pledged their cash to the cause, and some of those in attendence included Bobby Gillespie, Tracey Emin, The Pogues’ Spider and Jamie T.

See a trailer for the documentary here: Breakingrocks.co.uk