See the video - Plus WIN the chance to live the ‘Rock Band’ dream in Ibiza! 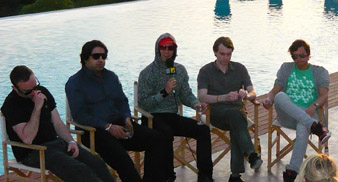 Microsoft’s search for live ‘groups’ playing the Xbox 360’s Rock Band Game, will result in the winners getting a week’s VIP treatment at the newly opened Ibiza Rocks Hotel, where bands such as We Are Scientists and Reverend and the Makers will take to the stage in the hotel courtyard every night this Summer.

Maximo Park and MTV will be judging the entrants, and MP lead singer Paul Smith revealed what he is on the look out for, saying : “All the best rock bands have got amazing star quality and whilst they’ve got to play their instruments well they’ve also got to have the showmanship to excite a crowd.”

Smith added: “From outrageous outfits and haircuts to amazing postural performances we are looking for a group who give us all of this and more on top!”

The latest multiplayer ‘Guitar-hero’style game, which has now come to Europe after massive success in the US, gives up to FOUR people the chance play the part of bassist, guitarist, drummer and singer of their favourite rock groups.

The game’s catalogue already includes David Bowie, The Clash, The Pixies and Radiohead, with new album tracks being added weekly. Motley Crue actually released their latest studio effort through the game in the US, with sales completely out-stripping those on iTunes. More bands are expected to follow suit in the coming months.

Players of the game, the ‘bands’ also get the chance to go on a ‘world tour’, starting off playing the local town toilet venues to three people and a dog, but with dedication and skill can unlock levels with the aim of living the Rock Band dream playing in front of a baying stadium crowd! Complete with groupies…

Heats for the Xbox 360 Presents Rock Band Live competition are due to take place here in the UK, France and Germany. For more details on Rock Band and how to enter your band, click here for www.xbox.com/rockband
Check out Maximo Park’s ‘cover version’ of David Bowie’s “Suffragette City” here: