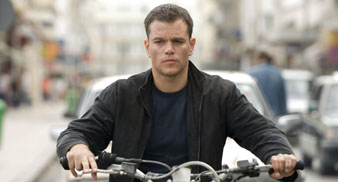 Matt Damon has re-ignited the ‘Bourne versus Bond’ debate by slating the latter as a misogynist relic of the 1960’s.

On the eve of “The Bourne Ultimatum”’s release, Damon, who plays Jason Bourne in the series, has claimed his character is steeped in deeper moral integrity then his rival.

Speaking to reporters at the premiere, the star said: “The Bond character will always be anchored in the 1960s and the values of the ‘60s. Bond is an imperialist and a misogynist who kills people and laughs about it and drinks Martinis and cracks jokes.”

He added: “Bourne is a serial monogamist whose girlfriend is dead and he does nothing but think about her … he doesn’t have the support of gadgets and feels guilty about what he’s done.”

The Bourne Ultimatum director, Paul Greengrass, went even further by insinuating that the Bond franchise is superficial compared to the Jason Bourne series.

He said: “The Bourne franchise isn’t about wearing Prada suits and looking at women coming out of the sea in bikinis. It is about essence and truth, not frippery and surface.”

The Bourne franchise has broken box office records in the US and received critical acclaim while the last Bond film was credited with re-invigorating Ian Fleming’s character for the 21st century.