'Me Llamen Calle' will be downloadable from next week 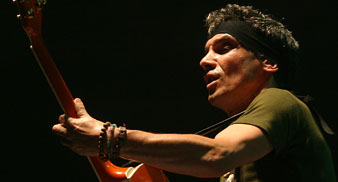 Manu Chao is to giveaway his award-winning track ‘Me Llamen Calle’ for free with The Guradian newspaper online next week.

The single, which translates as ‘They Call Me Street’ was originally written for the soundtrack of celebrated 2005 Spanish film ‘Princesas’ directed by Fernando León de Aranoa.

The track won the Spanish Goya award, the equivalent of the Oscar, for Best Original Song. The track, which features on Chao’s album ‘La Radiolina’ has also won a Latin Grammy Award for Best Alternative Song.

Manu Chao will make the single available for free for a week from December 14 at www.guardian.co.uk/music, after which the single, proper, will be released through iTunes on December 31.

‘Me Llamen calle’ will be backed with two exclusive live tracks – ‘Mr. Bobby’ and ‘Día Luna … Día Pena’ – which were recorded at the Coachella Festival in April this year.