Singer adorns room with candy for first listen of 'Licorice' 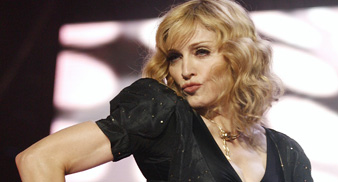 Madonna‘s latest studio album is to be entitled ‘Licorice’ and will be released next April, according to a report on US music website Billboard.

However, a Madonna fan site ‘Drowned Madonna’ have seperately reported that the new 13-track album is to be called ‘Give It To Me.’

Whichever is the case, this is the last album release for Madonna on her current record deal with her longtime label Warners. All future recordings are to be released through an all en-compassing recording and touring deal with promoter’s Live Nation.

Two tracks from the new album, ‘Candy Shop’ and ‘The Beat Goes On’ have been now been played on former Billboard editor Larry Flick’s radio show, as well as being leaked online.

Kanye West and Pharell Williams have both contributed to the new album.

According to ‘Drowned Madonna’ – the singer filled a room with sweets and a candy theme when playing the album to record label staff in New York for the first time.