Madonna Is Inducted Into Music Hall Of Fame 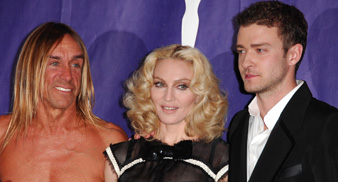 Madonna was one of five new inductees at the annual Music Hall of Fame ceremony in New York yesterday (March 10).

Madonna received her honour from singer Justin Timberlake, who said: “The world is full of Madonna wannabes. I might have even dated a couple. But there is truly only one Madonna.”

Madonna did not perform at the ceremony at New York City’s Waldorf Astoria Hotel, instead asking Iggy and the Stooges to play on her behalf.

The legendary NY rockers covered two of her classic tracks, ‘Burning Up’ and ‘Ray Of Light’.

Other inductees included the Dave Clark Five — Dave Clark paid tribute to singer Mike Smith who passed away two weeks ago aged 64 from pneumonia. Clark said: “Mike tried desperately to be here with us tonight. At least he know’s he’s a Hall of Famer. Mike, you’re with us in spirit, my friend, and always will be.”

John Mellencamp, Leonard Cohen and The Ventures were the other 2008 inductees.

Mellencamp was given his honour by singer Billy Joel who said; “You scared us a couple of times when we thought we’d lost you, even though it might have been a good career move.”

Legenadary Canadian singer-songwriter Cohen, called the ceremony “a very unlikely occasion for me. It is not a distinction that I coveted or even dared dream about.

Artists are eligible for the US Rock and Roll Hall of Fame 25 years after their first recording, the list is then whittled down each year by a committee of music industry experts.