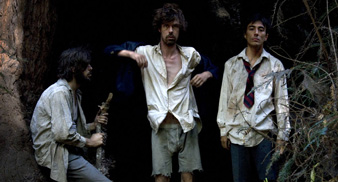 Liars have announced details of their new album ‘Sisterworld’, as well as a bonus CD featuring remixes from the likes of Radiohead‘s Thom Yorke.

The band release ‘Sisterworld’ on March 8, with the expended version of the album out on the same day. Along with Yorke, the second CD features remixes from Tunde Adebimpe (TV On The Radio), Bradford Cox (Deerhunter/Atlas Sound), Melvins, Alan Vega (Suicide), Chris & Cosey (Throbbing Gristle) and Blonde Redhead

Frontman Angus Andrew said he wanted the other artists involved to expand on the common idea of remixing tracks.

“They were asked to ‘re-interpret’ the song by any means necessary and the result is definitely the most exciting collaborative effort we’ve been involved in,” Andrew explained.

‘Scissor’
‘No Barrier Fun’
‘Here Comes All The People’
‘Drip’
‘Scarecrows On A Killer Slant’
‘I Still Can See An Outside World’
‘Proud Evolution’
‘Drop Dead’
‘The Overachievers’
‘Goodnight Everything’
‘Too Much, Too Much’

The full tracklisting for the bonus disc will be announced shortly.