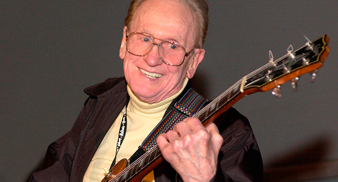 Few guitarists will ever make as much of an impact on the music world as Les Paul. As well as being a deftly intuitive player and a studio pioneer, he lent his name to an iconic instrument that became a cornerstone of rock ‘n’ roll, the “axe” of choice for thousands of celebrated strummers and pickers down the years.

Les Paul began playing banjo and guitar professionally in 1928, when he was just 13, at a drive-in restaurant in his hometown of Waukesha, Wisconsin, and first dabbled in electronics and amplified sound by boosting the volume of his instruments so that he could be heard by outside diners. By the end of his teens he was playing in both country and jazz bands, and continued his technical experiments when his group’s music was being broadcast by radio stations in Chicago and New York.

By the late 1940s he’d moved again to Hollywood, where he married singer Colleen Summers, who renamed herself Mary Ford. The duo stunned the record industry with a series of releases that featured both Ford’s voice and Paul’s guitar multi-tracked to create a wall of sound, at a time when Phil Spector was still in short trousers. “Tennessee Waltz” was their first bit hit, followed by more million-sellers like “How High The Moon”, “Waiting For The Sunshine” and “Mockingbird Hill”.

The full orchestra effect of their recordings could be replicated for live performances by a device called the Paulveriser (arguably the pop world’s first synthesizer), an intricate black box of a contraption that Les hooked up between his guitar and a public address systems, but it was an earlier Paul prototype, a solid-bodied electric guitar he’d first built from scratch in 1938, that cemented his legend.

Gibson started mass-producing the instrument in the 1950s, although the company insisted that Paul merely licensed his name to a guitar their own boffins had fashioned and that he had had little to do with the nuts and bolts of the design. The controversy over who actually invented the model still rages intermittently, but the guitar itself was soon established as one of the most versatile and popular on the market.

Pete Townshend and Jimmy Page are arguably its most high profile players, although it’s a safe bet that almost every guitarist in the world has slung one round their neck at one time or another.

Paul and Ford divorced in 1962, and in later life the guitarist returned to his country roots, often making records in tandem with another influential musician, Chet Atkins. Just a few months before his death from pneumonia, Paul was still playing a weekly gig in a Manhattan nightclub where he would habitually invite members of the audience, including famous fans like Slash, Bruce Springsteen and Aerosmith’s Joe Perry, to join him on stage.